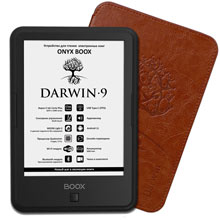 
ONYX BOOX Darwin 9 is an E Reader which continues the most popular series of 6” ONYX BOOX devices made in a classic body with side buttons. The model has a 6” E Ink Carta Plus screen with the highest resolution and contrast for models of this size. The Darwin 9 is equipped on a modern high-performance processor and has 2 GB of RAM and 16 GB of internal memory. A built-in Wi—Fi module allows you to use network services, and Bluetooth support allows you to connect wireless accessories, including headphones and speakers. Thanks to the Android 11 operating system, various third-party applications can be installed on the reader. The pre-installed audio player makes it possible to listen to music and audiobooks, and the support of the TTS (Text-to-Speech) function allows you to voice text files.

The MOON Light 2 technology enables one to use the device in the dark or under poor lighting conditions. When this function is on, soft luminescence of the screen comfortable for reading in dark rooms is being generated. It also has a color temperature control and, thanks to the Flicker-Free technology, this screen frontlit system is perfectly smooth.

The capacitive touch screen with the Multi-touch function provides convenient control when reading or setting the device: scrolling, zooming, running the context menu and much more. Controlling the E Reader is as convenient as using a smartphone or tablet.

The up-to-date 4-core processor together with 2 GHz clock rate and 2 GB of RAM ensure a comfort work with the most difficult documents. And 16 GB of nonvolatile memory and a slot for SD cards allow the user to store a huge library of necessary ebooks.

The BOOX software allows the user to open files of various text and graphic formats. When reading you can change font style and size, disposition of pages, insert bookmarks, add your own fonts and zoom documents at your will.

There is a pre-installed audio player in the device which allows you to listen to music and audiobooks. To use it, it is enough to connect headphones or a speaker to the E Reader via Bluetooth or via an audio connector and run the corresponding file. The device also supports the TTS (Text-to-Speech) function, with which you can voice text files.

The eReader comes with a smart cover which not only provides effective protection of the screen, but when closed turns automatically the device to sleep mode.

Low power consumption of E Ink displays and battery capacity of 3000 mAh provides up to a month of autonomous work.

The BOOX allows the user to read documents in different world languages. Amongst them there are such languages as Russian, English, German, French, Spanish, Arabic, Swedish, Chinese, Japanese and many others.

Note: Since a part of the Flash memory size is system software, the portion available to the user is less than the total size of the memory chip.

The device is designed primarily for reading electronic books, but has some additional features which are defined by the installed software. For example, the current firmware has functions such as calendar, dictionary, access to the Internet, and others.

The device is freely reprogrammable on request of the user who can install, delete and create programs.

The device has a battery that provides long, autonomous usage.