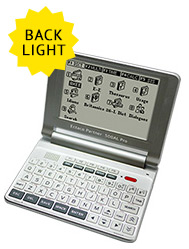 Buy now and get the Accessory Pack ($50 value) as a gift!

ECTACO Partner 500AL Pro is a unique translating device which allows choosing the language you want.

The list of dictionaries already included in the 500AL Pro by default:

Designed to let anyone understand and communicate instantly, the 500AL Pro features all the latest programming advances. The 500AL Pro employs sophisticated TTS (Text-To-Speech) voice synthesis and human voice to speak any of its entries aloud so you don't have to. Perfect for anyone just beginning to explore the world of international communication, the 500AL Pro is loaded with the linguistic resources and extras that make all the difference when you need a reliable, portable companion to help make sense of the world in another language.

An additional 14,000 first-use phrases that can also be spoken aloud make it simple to understand and be understood in almost any commonly encountered situation. Oxford Advanced Learner's Dictionary helps to build a winning vocabulary quickly and accurately. Add in popular American idioms, a full English grammar resource with irregular verbs, and enjoyable linguistic games to improve your skills while you play and you have one of the best all-around translators ever designed.

Employing the latest TTS speech synthesis to deliver complete pronunciation of all the entries in the 500AL Pro database means that you will always know just how a word should be said. No more trying to sound out a transcription. Just touch a button and let the 500AL Pro do the talking for you. And with unlimited voice output, the device will say anything at all - just enter any word using the comfortable and intuitive keypad and get instant clear and audible pronunciation at the touch of a button.

The user-friendly English interface makes navigating through the volumes of information contained in the 500AL Pro fast and easy. The device also features an advanced Look-up function and a Word Recognition utility plus the award-winning Vector Ultima™ spell-checker to ensure accuracy. An easy to read Large 4.3" Black & White Screen with Backlight lets you use the device for hours on end without the fatigue that comes from using other screens.

In addition to all the most indispensable linguistic resources, the 500AL Pro also comes pre-loaded with loads of extras usually found in the most sophisticated business organizers. Use the World Time utility to stay on schedule no matter where you are and take charge of your finances with the built-in calculator. Currency and metric converters let you make sense of exchange rates and size differences easier than ever before.

CUSTOMER REVIEWS & TESTIMONIALS
Our customers are our best referrals! We take pride in helping people understand one another all over the world! Read on and find out how others have overcome language barriers using outstanding Ectaco products, or send us your comments!

Other products:
Discover what other devices and software applications are available for the languages you've selected.